Shooting Industry Under Attack From The ALF.

These birds have been taken to a safe place far away from the oppressors wishing to profit from selling a chance to shoot these birds in the name of ‘sport’ or ‘conservation’.”

Then on the 27th of June this was published on Stop the Cull: 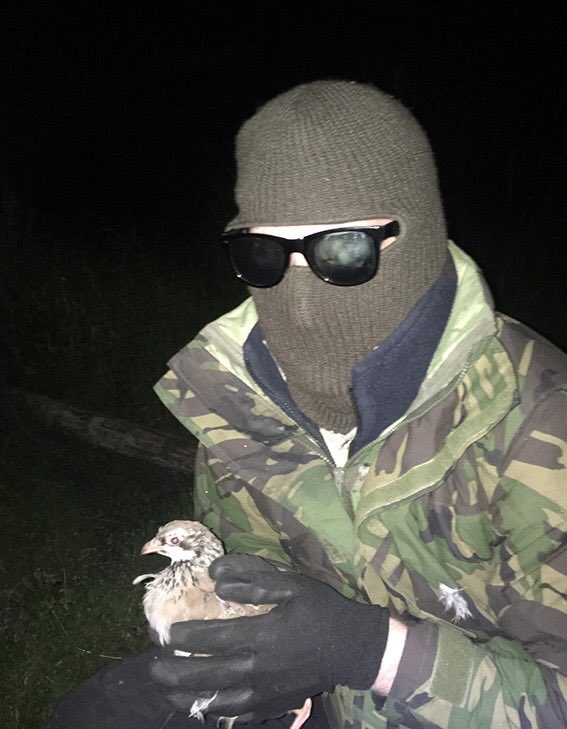 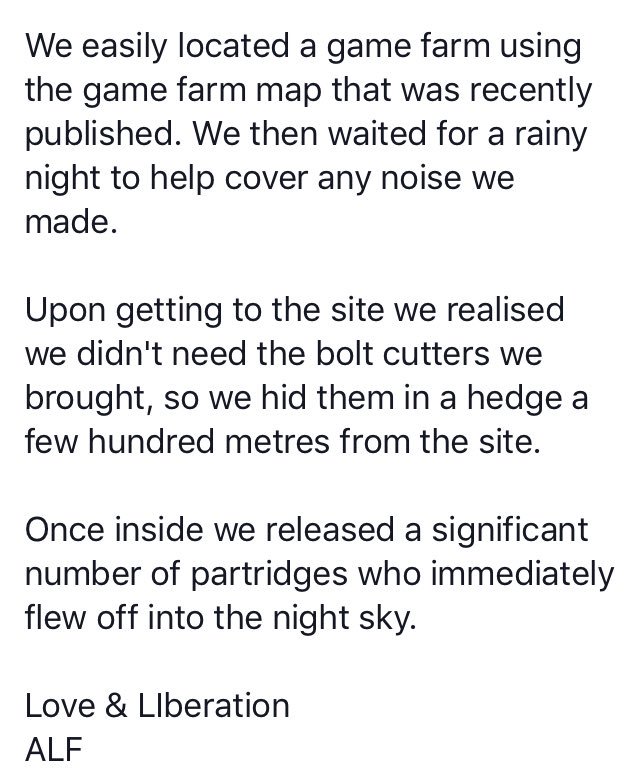 The game farm map that was referred too on this report, created quite a lot of concern in the shooting industry when it was first published. The countryside alliance asked all of their members to report the post on facebook, which did result in the post being taken down, however the map is still available for anyone to view and you can find it on this link.

Just days after the partridge liberation this pheasant liberation video surfaced on facebook, filmed by the game farm owner, believed to be in East Sussex:

This report has been recieved:
“We hit a game farm in the South East UK that was breeding pheasants for the shooting industry. We’ve heard since that 9000 birds managed to escape. It was quite an easy job, we sliced through the netting with scissors & stanley knives and rolled it up to avoid birds getting tangled up.
Then we entered the pens and encouraged them to fly off. The sheds were left open and all the heat lamps were disconnected and smashed. The electric fence was also disconnected and then cut so the birds wouldn’t struggle with it.

Following on from that, just yesterday ANOTHER 20,000 birds reported as being liberated by a game farmer on facebook, report recieved anonymously.

“During the night of Monday a group of us approached a game farm near Pembury, Kent that we had located via the game farm map. The pens were flimsy and breaking by themselves, so we had to be very careful when cutting the chicken wire. We used tin snips to cut through a couple of panels on each pen whilst leaving the frames intact, this was done over a period of time to ensure total safety of the birds as they escaped. We then opened the shed doors and cut through the plastic walls to make as much space as possible for the pheasants to run away. Finally, we walked in a single line to the back of the pen, and making a straight row from the back, we herded the birds slowly to the cut panels. They didn’t hesitate and started flying as soon as they were away from the pens. We then decided to trash the feeders, put the grain away from the pens and in the woods to lead them away from their imprisonment.

The last three pens didn’t have any juvenile pheasants on the runs, but the sheds were crammed with one week old pheasants. Over half of the birds in those sheds were dead, and without water or feed access, we decided the best course of action was to open the doors and let them do as they please.   Once all the birds had been helped as much as possible, we turned our focus on trashing the farm as much as we could, cutting fencing, chicken wire, electric fences as well as gas pipes after turning the canister valves off. We trashed some of the gas regulators as they are easy to break and expensive to buy. We hope that that farm doesn’t manage to continue and that the shooting season is over for them before it starts. We also hope that people feel inspired, get tooled up and destroy as many game farms as they can, giving a chance to the birds to experience freedom whilst causing huge financial loses to scum with shotguns.

Until all are free. ALF.”

Pheasant chicks dying in large numbers on game farms is not at all unusual. A HSA investigation revealed thousands dying at Bonson Wood Game Farm and this forum post from within the industry confirms that and goes further by naming a game farm that is notorious for high mortality rates. The game farmer in this instance of course took the easy option and immediately blamed the people liberating the birds for killing them, their facebook friends in the shooting industry of course all joined in with a chorus of comments along the lines of
“how could anyone be so cruel?”
This is from the same people who breed and release tens of millions of game birds to be shot and kill any animal they see as a threat to those birds. Their crocodile tears that they assume will be believed by an uneducated public hasn’t gained any traction anywhere beyond their own online echo chamber.

If you would like to support our work publishing these reports, you can buy us a cup of coffee here: ko-fi